When not busily spreading the Word of Goddess, I spend my time being a (ta ta-ta taaaaaaa)

for Advance Publications, Internet in the urban jungle that is Jersey City. For the most part, I spend lots of time doing things with CGI that really shouldn't oughta be done with CGI (but, these days, everybody loves a web interface). 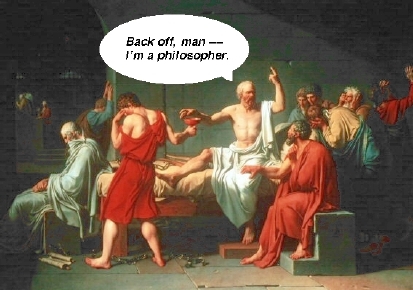 I've also been sneaking up on a Masters degree in philosophy at the CUNY Graduate School and University Center (and fruit stand, though no one ever thinks that's worth mentioning), 3 or 6 credits at a time. At the time of this particular writing (Aftermath 17, 3162), I've got 21 of the 30 credits tucked securly under my codpiece, and I'm hopefully on my way to getting credits 22-24.

Why philosophy? A lot of people ask me that (when you tell a bunch of computer-professional-types that you're going to school for philosophy, then tend to look at you as if you've just made lewd advances on their peach cobbler -- they're not sure if they should be offended, confused or disgusted, but they're quite certain that there's something very wrong with you).

Well, one impetus is that I'm a hardline epistemological skeptic, and studying philosophy is very good for showing you just how little people know. I've always thought that just about every position on every question is open to doubt -- studying philosophy has shown me that, contrariwise, almost every position on every question can, if you really push the issue, be defended to some degree (often a doctorate). Symmetry is nice.

Also, I fall in with Plato in thinking that contemplation is the only virtue that the Gods share with man (a boon for all those who wish to make a virtue of the lack of productivity). Also, I think there are some questions for which the asking is more important and more interesting than the answering.

Finally, I can think of no better way to aggravate those self-righteous academicians than to force them to associate with Discordianism. I fully intend to be the proverbial poor relation at the state dinner, buttering my bread with a spoon and making loud, off-color jokes about the maitr'd. After the Original Snub, I'm making damned sure that Eris gets invited to this snooty little affair. The barbarians are storming the Ivory Tower, people, and they've got Jell-O-filled waterballoons for everybody.